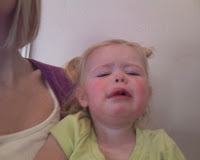 Leiden experienced her first real "owie" today. She was playing a game she loves to play matching keys into keyholes and then telling us proudly when she's got one right. She was trying keys out in the truck door and got it right so she ran over to pull my leg and said "Poppy Look!" I looked over and told her good job and she went running back to the truck to get the keys. In her excitement she got a little ahead of herself and tripped face first onto the concrete. The results were painful - one skinned knee and one majorly cut / fat lip. When I ran to pick her off the ground I immediately noticed blood all over. We took her into the bathroom and cleaned her up and the blood seemed to scare her as much as anyone. In all the pain the only thing that seemed to distract her from her crying was spraying Solorcaine on her cut. She thought it was "body bubbles" and the rest of the morning she kept asking for more bubbles on her owie.
Posted by Jake Seethaler at 5:00 PM 2 comments: 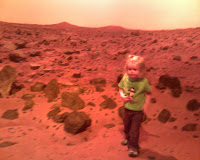 We had a fun family night activity of heading downtown to the Clark Planetarium for a 3D movie about the ocean with Leiden. She loves animals, but we didn't know how well she would hold up in a movie, but since it was only 45 minutes long we thought we'd give it a shot. She was really into the experience 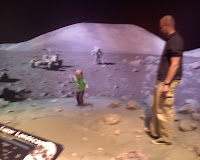 until the movie started, then she didn't want to wear her glasses or watch the movie, but once the fishes started swimming on the screen we convinced her to try the glasses for a minute. Her expression was priceless - she would put on the glasses and her mouth would literaly drop open with amazement and she would quickly grab the glasses to pull them off her face and see how close the fish was - when it wasn't right there in front of her on they'd go again. She did this for a good 5 minute set - amazed the whole time. She lost interest for the bulk of the movie but went in for more 3D fun at the end with the same look of amazement. Afterwards when we asked her how the fish movie was she kept saying - "They're Coming" because it looked like the fish were coming at you. We played around on the Mars and Moon exhibits for a while before heading home.
Posted by Jake Seethaler at 2:53 PM No comments: 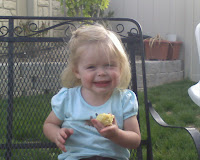 Saturday May 24th - Memorial weekend was great. We started it out with a BBQ on Saturday night at the Seethalers complete with Amanda and Steve, Jes and Melisa, Jenn and her roomate Amanda, Grandma Nye and Pat Haack, the Seethaler clan and us. We played games and had some fantastic Chicken and Hamburgers. 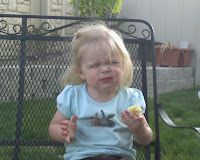 The best my dad has ever BBQ'd if I dare say so. Leiden loved the corn and found a new fun game of taking toothpicks and making them stick in the holes on top of the salt and pepper shakers. Game night was a little split up so we made up some of our own games including a fun game of winding the tether ball to the top of the poll then standing as close to the poll 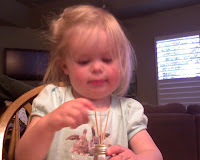 as you dared and letting the ball unwind. If the ball hit you you were out, but if it didn't hit you whoever was standing closest to the poll won. It basically tests your limbo skills without moving - the ball swings to you and you lean. Afterwards we played a rousing game of Trouble with the Pop-O-Matic bubble. Finally we finished off the night with our spin on a cheesy "get to know you" question jar. Everyone would pull a get to know you question out of the jar then have to slip it in to conversation with the people who weren't involved in the game. It was hilarious to see how you could slip the answers to some of these questions into normal conversation.

Sunday May 25th - After church we headed down to Provo to see my Grandpa Joe and visit graves. The highlight there was playing in Grandpa's giant overgrown tree. We hid out - took some pics and scared Amanda and Steve and Mom, Dad, Sarah, Jenn, and Amanda when they showed up. 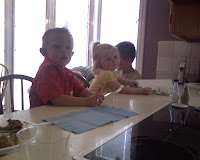 Basically the routine was to hide in the tree near where their feet would be and come running out of them when they got settled out of the car. They let out some good screams and we had some good laughs. We left Provo to go to the Smith's for family dinner. The dinner was awesome we had pulled pork and ribs - it was D-licious. Leiden loves hanging out with her cousins.
Posted by Jake Seethaler at 12:00 PM No comments:

So we just launched our new - extremely streamlined - new family site - www.seethalers.com. The idea is basically to be a portal to branch out to everyones unique websites and possibly also be a gathering place for some information like family email, calendar, stuff like that. For now as you can see there are just links out to a unique page or blog or whatever. If you want your own page or want me to update content let me know. Until then let me know what you think.....
Posted by Jake Seethaler at 4:09 PM No comments:

So a week ago we ran as a family in the Stake Family fun run. When we arrived at the Stake Center we were planning on just taking it easy and running as a family with Leiden in the chariot. Juliann Allen was there along with her husband Brad and son BJ so we knew the Allens were going to pose some tough competition for the Seethalers. Jeremy Ashby was also there so I knew my chances were out. We did our stretches, talked to friends and then right as the race was about to start Manon said to me, "You don't have to stay with me" and then the whistle blew. From that moment on Manon and Leiden were in it to win it. It was a brutal race, but Manon led the ladies for the whole course. In the end Jeremy Ashby proved unbeatable, but Leiden came in 2nd overall, I cam in third overall and Manon came in 1st of all the ladies! So it was a Seethaler family 1st, 2nd, and 3rd day!
Posted by Jake Seethaler at 5:28 PM No comments:

This past weekend we made a trip out to Wheeler Farm. We haven't been out there yet this year, but Leiden is even more in love with animals then ever so we thought we'd make the trip. The 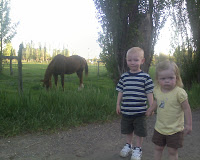 Jacksons met us there and right away Leiden was having a great time playing with Carter. As soon as we saw them she yelled "Hi Carter" and then they just chased each other around for 20 minutes while we ate some dinner. When we actually headed over to the farm they decided 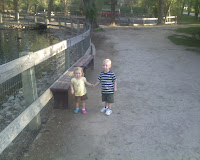 that they wanted to hold hands. It was way cute, because it was totally unprovoked and they just wanted to hold hands the whole time we walked around the farm. If one of them got away from the other one either Leiden would yell "Carter my hand!" or Carter would say "I want to hold Leidens hand." Needless to say the animals were a big hit with Leiden. She loved feeding the ducks, petting the lambs that had such soft wool that she loved squishing her fingers in just like her mommy. Both Leiden and Carter wanted to feed the horse's, but as soon as you'd lift them up with a handful of grass and the horse turned his head they'd drop the grass and reer back afraid the horse was going to take off their whole hand. Leiden was pretty sad when we had to leave, but we had a great time. 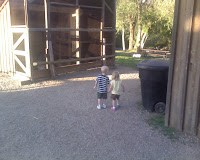 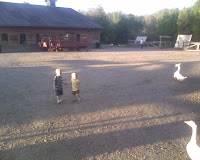 Posted by Jake Seethaler at 1:29 PM No comments:

Excerpts from another great letter Manon wrote to Dan....

I think your mom told you that we all went to St. George. It was fun but she left out some of the funniest details. I guess she did tell you about the bike thing that was totally crappy. So some of the fun or funny things were: 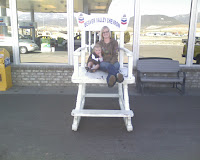 Entertainment of Leiden.- the first day we were there Dad took us on a tour of the facilities and on the way we found I gigantic stink bug. Everyone was so entertained watching Leidy talk and look at the bug. As we walked away she kept saying bye buggie, bye buggie.

Sleeping arrangements – Sara wanted to make a deal with Rob. She wanted to sleep on the pull out (probably because Dad just got done saying how it was the coveted bed and you got it a lot of the time) and have Jenn sleep on the sofa. Then Rob could have a room all to himself. Needless to say Jenn wasn’t having that.

Hand Pong – They made you buy the ping pong balls and check out the paddle from the club house which is a ways away from the games so Jake came up with a new game where you play with your palms instead of paddles. There were a few rule alterations but we had a competition with Rob and Jenn. It was a tight match but we came out victorious. 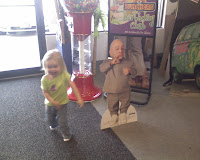 Kiddy Pool – We bought Leidy a new swim suit that has a built in floater. She looks kind of like the Hulk when she wears it only it’s pink. Anyway the kiddy pool is only 2 feet deep so she was just bobbing around like crazy.

Now it’s back to real life I guess.
Posted by Jake Seethaler at 5:55 PM No comments: