Jake and Dad went up to the old house in Sandy this morning (Saturday) to pick up the BBQ and remove the tree that was planted in honor of Grandpa Nye. Jake said your mom was laying the pressure on big time to ask where the tether ball because they didn’t get it when they got the poll. Both Dad and Jake felt too stupid to really ask for it back after over 2 years. Ha ha! Oh that is funny, lol. We are going to have a BBQ tonight with the newly recovered BBQ. Your Mom and Dad took Jake and I to Café Rio last night with a gift card your mom won. I finally found something I like there. So that was awesome. While we were eating your dad said that he wanted someone to plan a party for him next weekend. He said I will just do it myself if no one will take charge for me. We all asked why do think you deserve a party? And he reminded us that he is going to bike ride a marathon. I thought that was a good enough reason for a party so I volunteered. 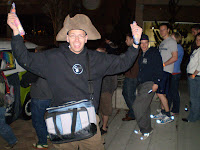 A while ago Jenn made Leiden a little book about Leiden for Leiden and it has a photo of you in it. We read it just about every night lately and I always ask her, who is that? She says Dan and then sometimes you get a kiss. It’s super funny. Tomorrow your family is going up to grandpas again maybe we will go too.
We didn’t go to grandpas but we did have that BBQ. Dad went grocery shopping for it so we were missing a few things like cheese for the burgers, ketcup, drinks. Your dad did get a new tether ball though. 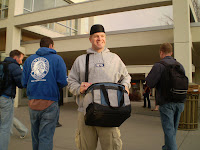 Today we went to the Icecream place to pick up 3,000 ice creams for the BYU party thing (I think I told you about that) but in case I didn’t. We got a referral from our friend that owns ICECREAMMAN.com. He was asked to do an event for BYU but was not going to be able to so he recommended us. We charged then cost for ice cream and then a flat fee on top of that to have us come out. So anyway we bought a new freezer thinking that might fit the ice cream but we were wrong. We picked up half the order and both freezers were full all the way. Jake ran to a neighbors to borrow another chest freezer to fit the rest of the spidermans. 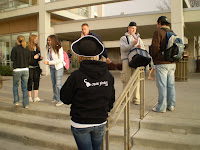 The party is Tuesday night from 7-11:30 or something so Jake figured we are going to have to hand out 1 ice cream every 4 seconds. We are scrambling today for helpers because we don’t know if we can give out that much ice cream just the two of us. Where are you when we need you?
Posted by Jake Seethaler at 5:52 PM