The following post is from an awesome letter Manon wrote to Dan. I thought I'd post it here because it has some great stories:
So we just got back from a sweet vacation with the Kennards. They invited us to go on a 3 day cruise with them to the Bahamas. We left Leiden with our parents and she had so much fun. We have some crazy miracles happen on our vacation.

The papers we got said the cruise check in was between 1 and 4 pm so we go off the plane and decided it would be cheaper to rent a car for the 4 of us to ride to the cruise place. Well our plane was late and the Kennards plane was an hour late so 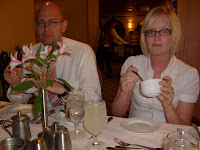 I was freaking out. It was 3 when they got in the car and we had an hour drive to drop the car off and then we had to catch a shuttle from the rental place to the ship. I called the rental place while we were on the road and told them of our predicament and they were nice enough to offer to drive us in the car we rented right to the ship. When we go there it was about 4:10 pm and the gates were locked. There were police guarding the dates and not letting anyone in that came after 4. I almost started to cry but decided to fight instead. (not physically but verbally although I wanted to punch the guards) I just couldn’t imagine myself standing there watching that ship pull away with out us on it. Luckily there were a few other people there with the same problem so we all fought and fought till finally we got them to call the captain. They captains response to the officers was “Tell those people they have 5 minutes to get up here” Most of the people had their cars with them so they were freaking trying to figure out what to do and some decided just to run and leave their cars. Nan and I grabs our bags and started running as fast as we could. Nan is prego and she booked it past me. I was carrying a huge bag and running so hard I peed my pants, laterally peed my pants. We were the first ones to get to the ship and get all forms filled out but as we started to board a guard grabbed Jake and told him “ I need your keys” Jake was freaked and said I don’t have any but the guy insisted he needed his key. The guard said I know you left your car sitting out there and we need to move it. So Jake figured it out and said oh I got a ride here I 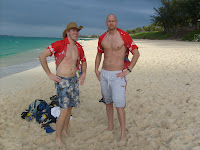 don’t have a car. They asked if anyone was coming after us and Jake just said the Kennards. So he really hosed the other people. (I think they still got on though) We were so happy to be on the ship.

We went to every meal available on the ship. Jake made sure we didn’t miss a single change to eat. We defiantly got our money's worth in food. We went to Nasssau the first day. We shopped around and went snorkeling at the beach where I dropped my glasses in the sand right on the shore line. I started screaming when I realized they were missing and Jake started to search. I was ticked at the Kennards because they didn’t seem concerned about helping me, just then Aaron started to scream and fish around with his hands in his pants. He was screaming there something in my shorts its biting me. Jake found my glasses and Aaron found a bee like creature in his shorts. The glasses must have washed in the ocean and then popped back out further down the shore. It was a miracle. 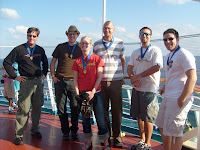 the Island. We signed up for a dodge ball tournament on against the crew of the ship. They put us in teams of 6. so it was me, Jake, Aaron and 3 other guys. Each team played the crew and then those that win played each other. Out of about 8 teams only 2 of us beat the crew so then they had us play each other. The previous day Aaron had bought a broken in cowboy hat to wear around and wore it during the tournament. There was a drunk lady that stared chanting Cowboy! Cowboy! Every joined in and it was awesome. Needless to say we were victorious and won gold metal which we were proud to wear the rest of the day.

So those are the highlights of our cruise. I will include some photos for you. I have more to say about Easter weekend but I will wait for all the events to unfold before I give you the recap.
Posted by Jake Seethaler at 5:48 PM